A Texas man whose gory Halloween decorations prompted multiple police visits last year has defiantly amped up the horror with his lawn display this October, including a refurbished wood chipper that shoots gallons of fake blood across his yard.

Steven Novak, 43, from Dallas, made headlines in 2020 after the bloodbath filled with fake bodies that he artfully installed in front of his home led to neighbors calling 911 out of fear it was a real crime scene.

The artist and engineer behind the infamous ‘Dallas Massacre’ has since added to the gruesome décor, giving fans a behind-the-scenes look at how he created the blood and guts in a series of viral TikTok videos.

‘There are lots of new gimmicks to this year’s caper,’ Novak told the Dallas Observer. ‘The wood chipper blood fountain being the clear centerpiece and easily the most challenging prop.’ 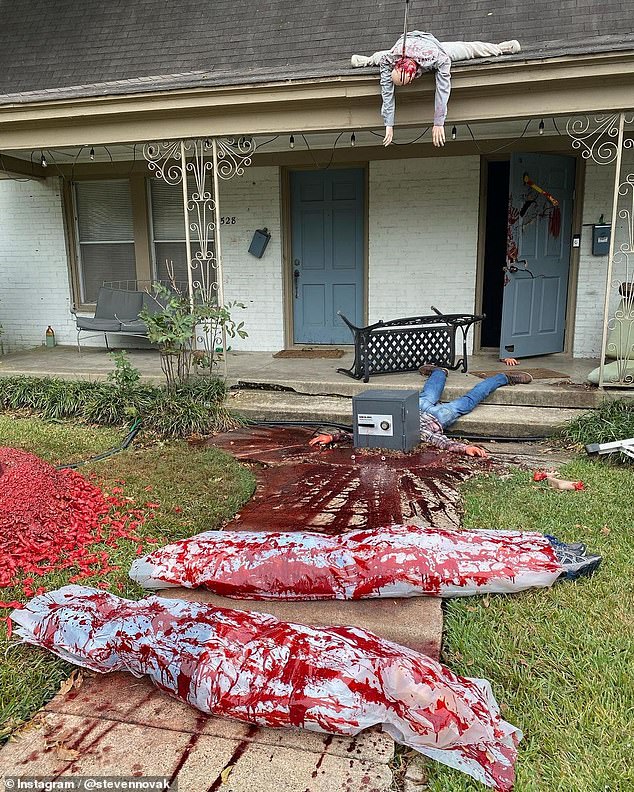 Bloodbath: Steven Novak, 43, from Dallas, Texas, has amped up the horror in his infamous Halloween display this October 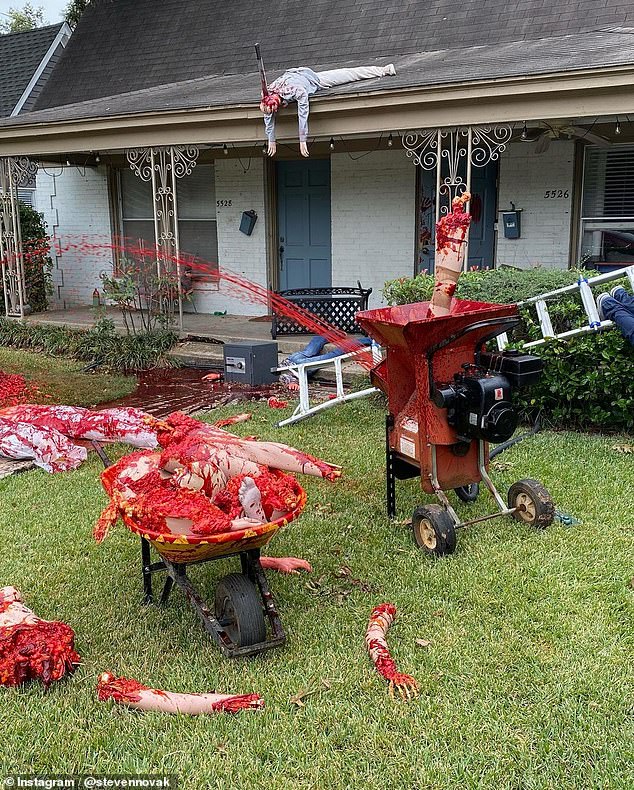 Whoops! The homeowner made headlines in 2020 after his murder scene littered with fake bloody bodies led to multiple police visits 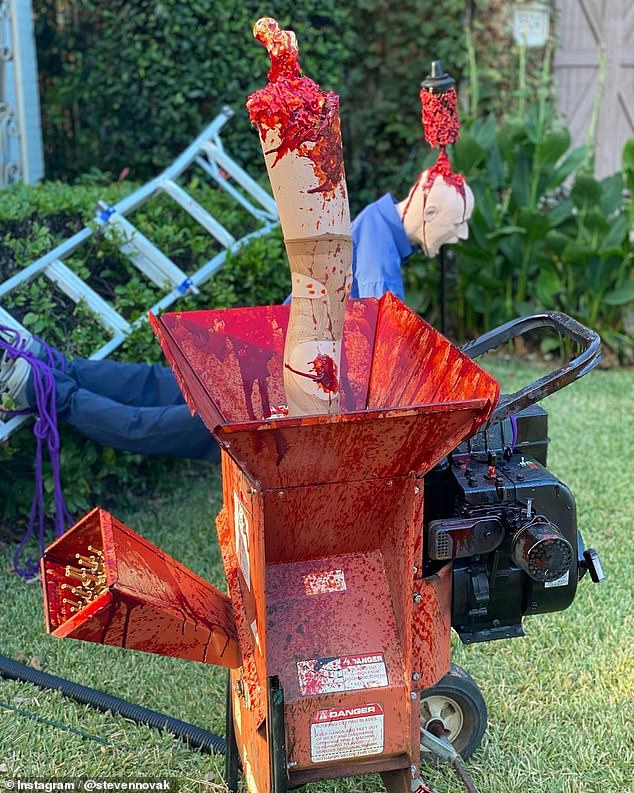 Clever: The artist and engineer behind the infamous ‘Dallas Massacre’ has since added to the gruesome décor, including a wood chipper that shoots fake blood across the yard 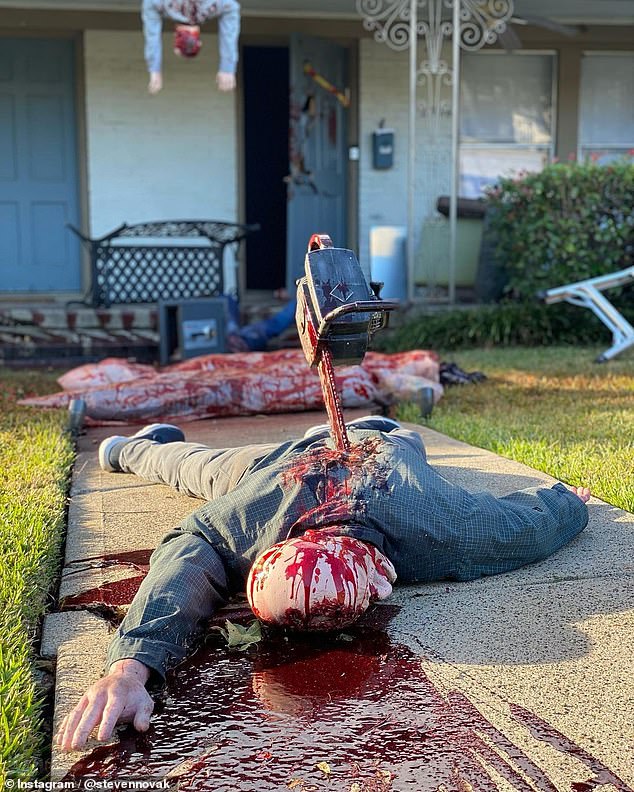 Can’t miss it! Novak has also kept ‘last year’s hits,’ including a dummy impaled by a chain saw

The homeowner said it took him months ‘to find an old wood chipper for sale,’ admitting that ‘the sellers were not pleased with its new purpose.’

The machine, which has a bloody mannequin limb hanging out the top, squirts fake blood across the walkway into a small pool of ‘guts’ made out of painted insulation foam.

‘It’s all powered by a submersible water pump inside the [kiddie] pool which then leads back to the wood chipper fountain,’ he explained. ‘You can turn that pump on with your foot by pressing a hidden pedal switch.’

According to one of Novak’s TikTok videos, the fountain blood is a mix of water, food coloring, and cocoa powder, which keeps the liquid from looking too translucent.

‘There are lots of new details,’ he told the local news. ‘Fifty-five-gallon drums are now out by the curb filled up with the shredded party [of guests]. 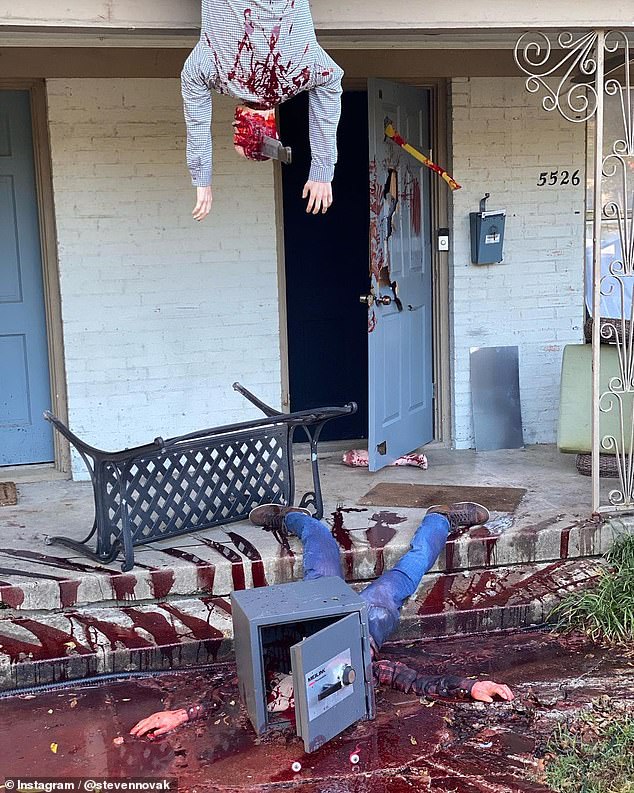 Body count: One mannequin hangs from the roof with a knife through its head while another dummy has its head smashed in by a large safe 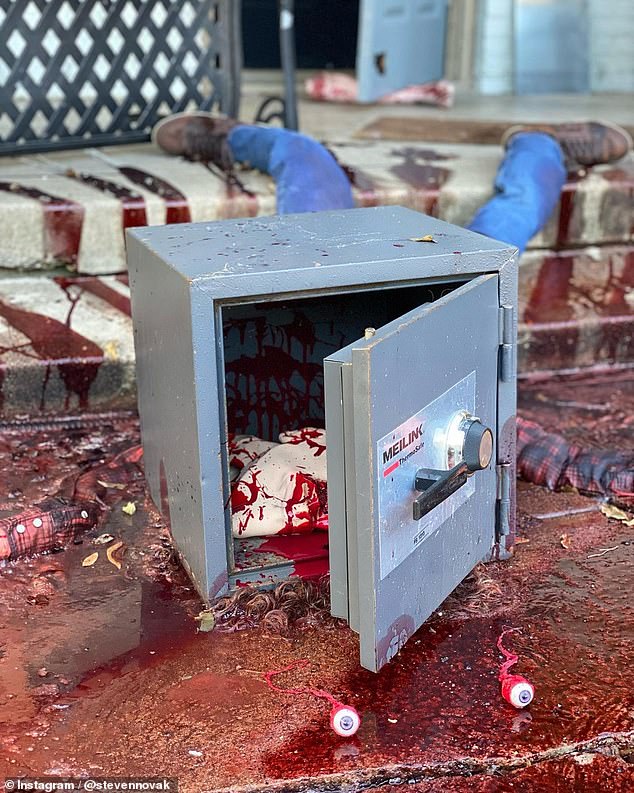 Added touch: Novak filled the pool of fake blood surrounding the safe with wig and eyeballs 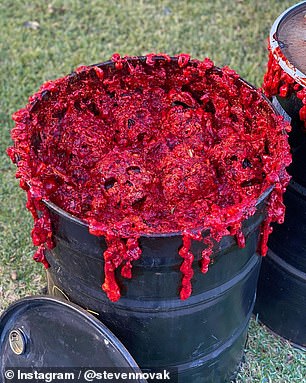 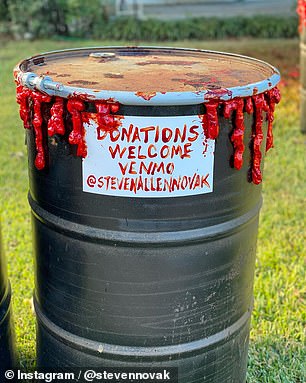 New details: Novak filled 55-gallon drums with the ‘shredded’ guests of the party. He included his Venmo account on one of the bins for donations 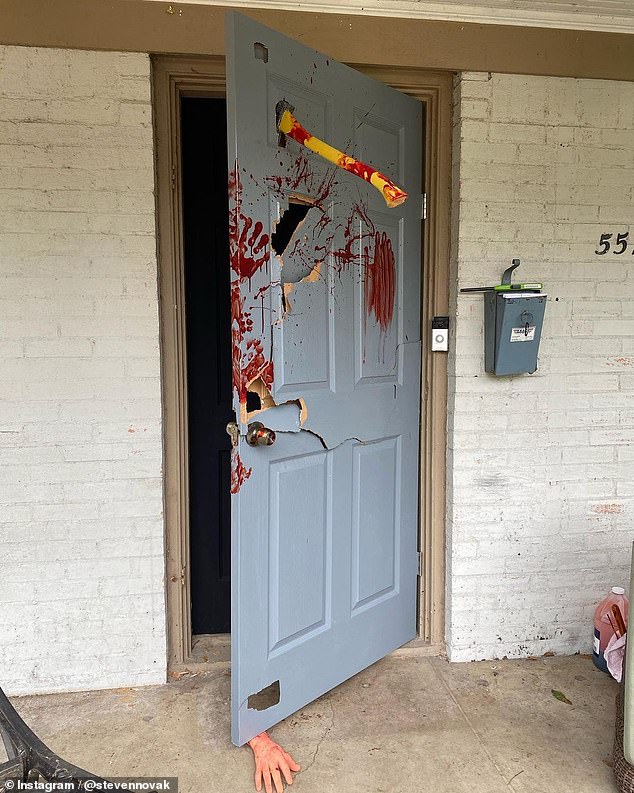 Brilliant: Another new addition is the fake door he installed to make it look like the house has been broken into by an ax murderer 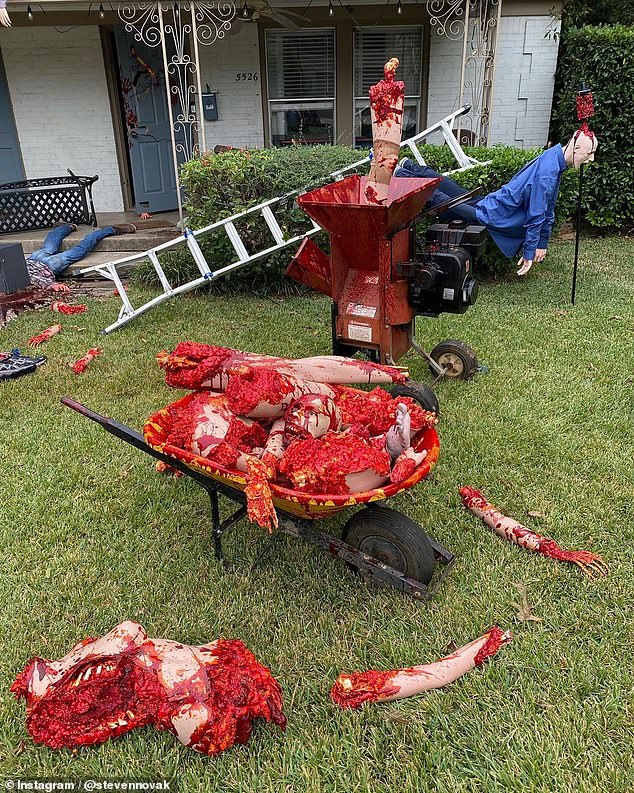 Yikes: Fake bloody limps were stacked in a wheelbarrow and tossed all over the lawn 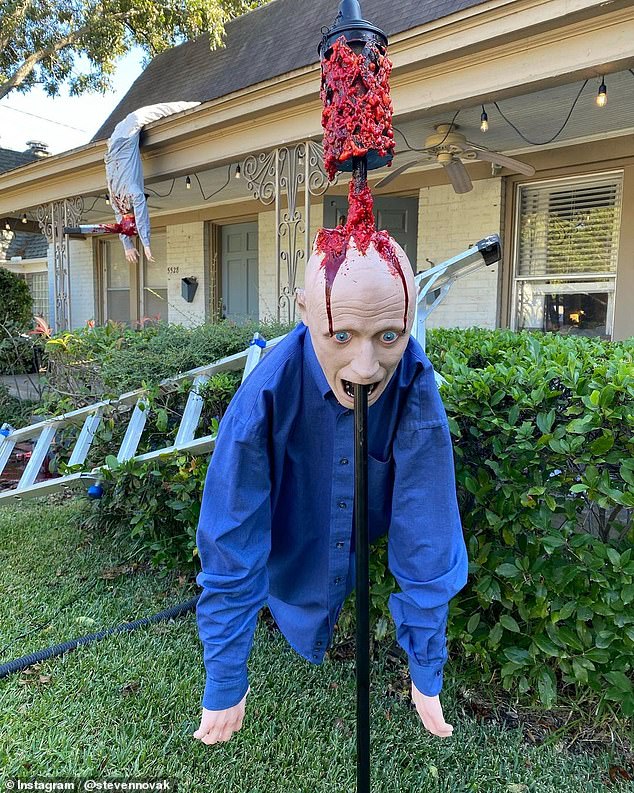 Ouch: One of the dummy on the property was impaled by a light sticking out of the grass

‘And I made the body parts this year by cutting up mannequins then filling them with skeleton parts and Great Stuff insulation foam.’

Another new addition is the fake door he installed to make it look like the house has been broken into by an ax murderer.

He created the optical illusion by covering the real door with black paint that reflects very little light and mounting a second door swinging open on its hinges.

Novak has also kept ‘last year’s hits’ — a mix of fake bodies and blood that were so gory they had the neighbors dialing the police.

There is still the dummy hanging off the roof with the large knife through its head and the fake body with its head smashed in by a large safe. 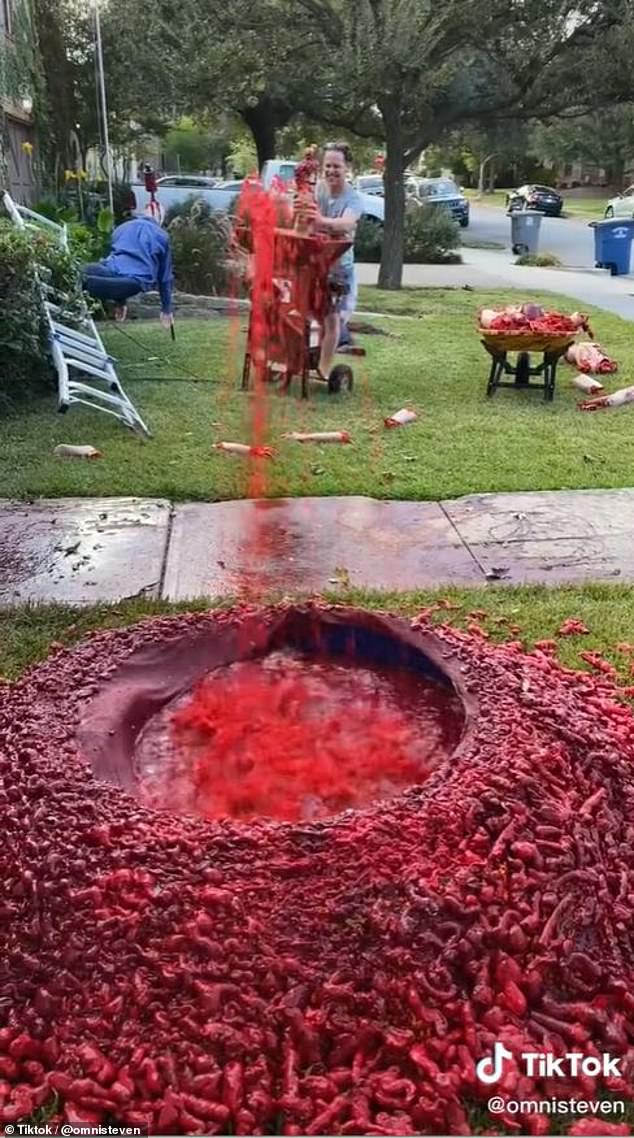 Popular: Novak has been giving fans a behind-the-scenes look at how he created the scene in a series of viral TikTok videos. In one clip, he is seen testing out the woodchipper blood fountain 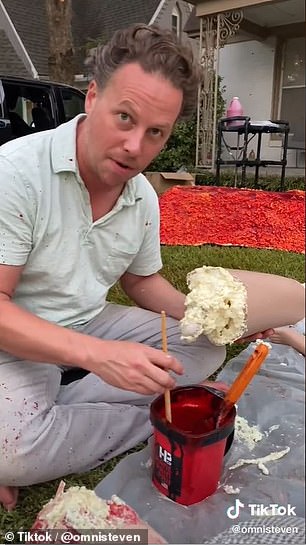 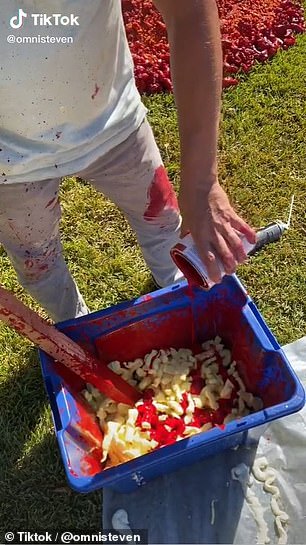 Looks real! The horror lover made the guts in the kiddie pool out of painted insulation foam 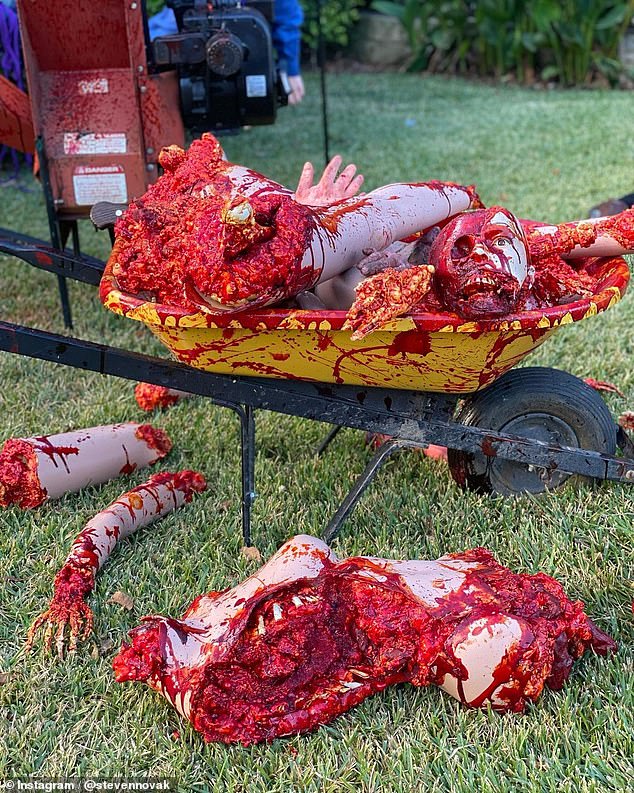 Whatever works: Novak told the Dallas Observer that focusing on his over-the-top Halloween décor has helped keep his mind off of the real horror of the pandemic 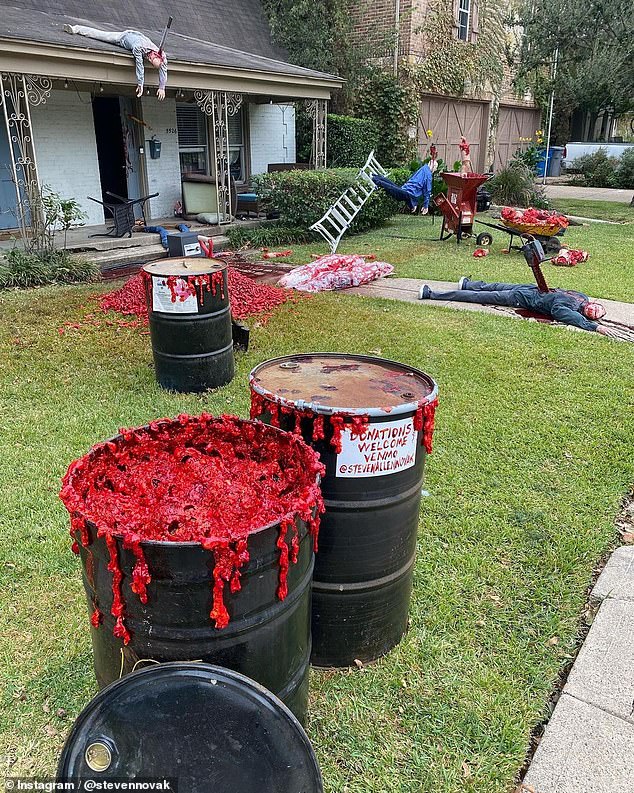 Keeping it real: ‘This year has been rough for a lot of people,’ he said. ‘I think we can agree that this project is functioning as a pressure release valve’ 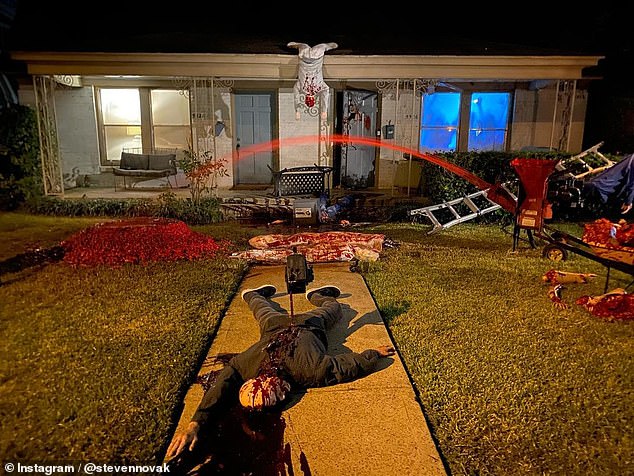 Wow: The house is even more terrifying at night when the wood chipper is spurting out fake blood across the walkway 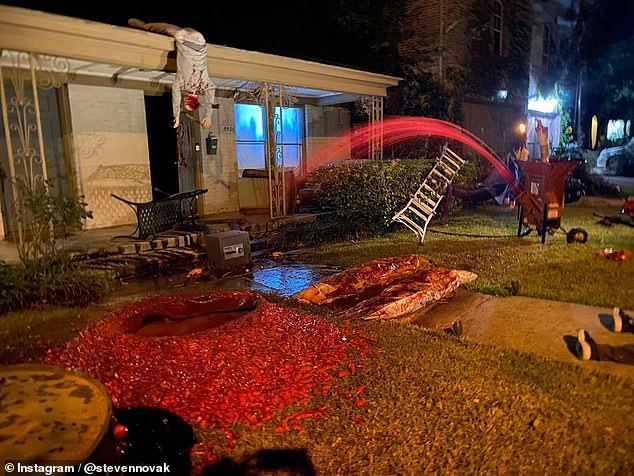 Living his life: Novak shared that he wasn’t worried about his Halloween display attracting more police attention, saying he welcomes them to come buy and ‘take more selfies’

He also included the mannequin impaled by a chainsaw and the gallons of faux blood made out of corn syrup that was splattered all over the sidewalk.

Novak told the Dallas Observer that focusing on his over-the-top Halloween décor has helped keep his mind off of the real horror of the pandemic.

‘This year has been rough for a lot of people,’ he said. ‘I think we can agree that this project is functioning as a pressure release valve.’

Novak is now welcoming donations to help fund his frightful work, and he included his Venmo account on one of the curbside bins.

As for the possibility of his updated massacre scene leading to more police visits, he isn’t worried about it in the least.

‘All the cops that came out last year were an absolute gas,’ he said. ‘I welcome them to come out and take more selfies.’