With the cost of energy at a record high, running an electric car is becoming increasingly expensive.

One of the biggest selling points of a battery-powered vehicle is that they should – in theory – have lower running costs than a conventional combustion-engine car, but the recent jump in wholesale electricity prices means they are almost on par with an equivalent petrol… if you only use public chargepoints.

However, drivers who want to make the switch to an electric car can save hundreds of pounds a year if they choose the most efficient models on the market – and there’s now an ‘E-Rating’ system that tells you which could pocket you over £1,300 in charging bills alone. 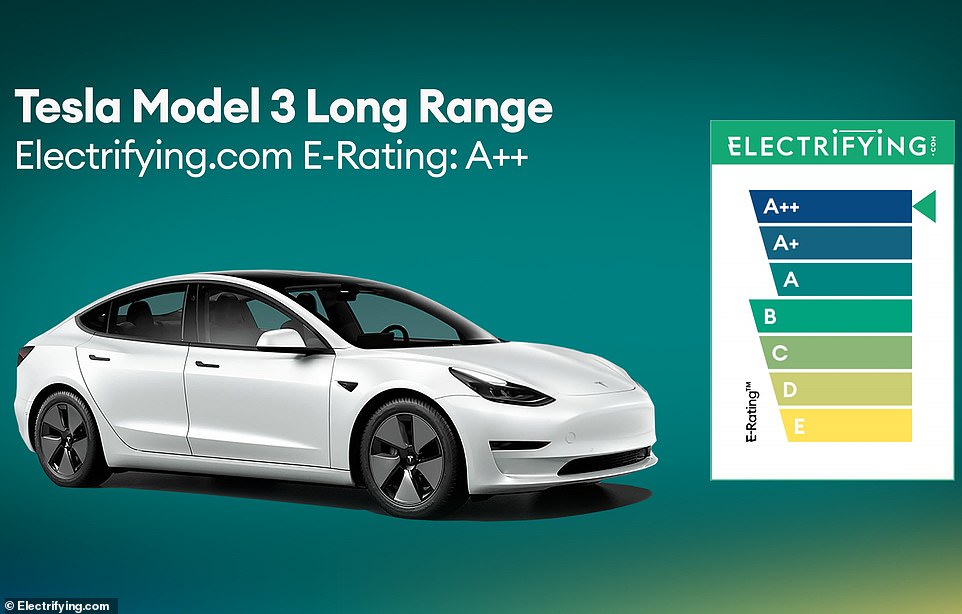 As electric car charging costs rise, found out which models are most efficient: Electrifying.com has an E-Rating scale for EVs, similar to energy ratings on white goods. The difference between an A++ and E car can be over £1,300, the website claims

The E-Rating has been created by the expert team at Electrifying.com. It uses a formula to give a one-off rating similar to EPC ratings for houses and energy ratings for electronics and white goods.

For electric cars, the algorithm takes into account how well electrical power is converted into miles on the road, the speed at which the battery can be recharged and features such as heat pumps, intelligent brake energy recuperation and climate control preconditioning that all help to improve efficiency to tell drivers which are the most efficient models on sale.

While both are among the priciest electric family cars on the market, Electrifying.com says owners can save as much as £675 a year in domestic charging costs if they drive one instead of the lowest ‘E’-ranked EV.

For those who do not have off-street parking at home and rely on the public network of rapid chargers, annual savings on charging costs could amount to as much as £1,300, it said. 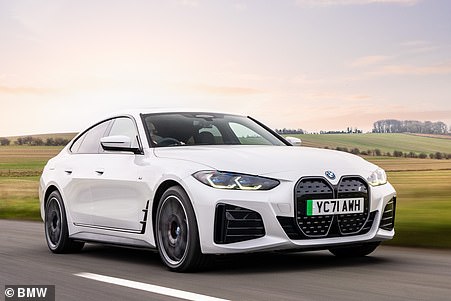 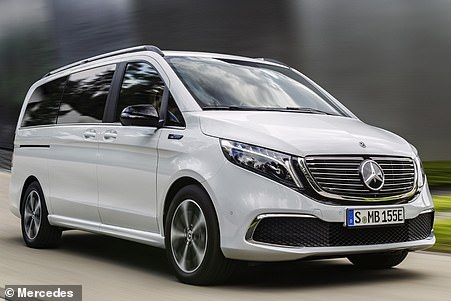 The E-Rating results have been shared as a report released yesterday showed the increasing financial impact of the energy crisis on electric car running costs, with the RAC highlighting a 42 per cent rise in costs to use the public charging infrastructure since May.

For EV owners who access the UK’s network of rapid charging devices, pay-as-you-go rates have increased by 18.75p per kilowatt hour (kWh) in the last four months on the back of the rising wholesale cost of energy.

The average rate across the infrastructure last week was a whopping 63.29p per kWh, with the most expensive – Osprey Charging – demanding £1 per kWh to use its devices.

This compares to just 34p per kWh for those who charge at home from 1 October under the energy price guarantee.

While the pricey BMW and Tesla family saloons are top of the order, at the other end of the scale is also a selection of supremely-expensive motors.

Mercedes’ £71,760 EQV people carrier ranks lowest of all 50 cars rated so far, being the only car on sale in the UK to obtain an E E-Rating.

Also towards the bottom of the scale is the £71,490 Audi e-tron and Mercedes’ £70,035 EQC luxury SUVs, which have both been issued D ratings. 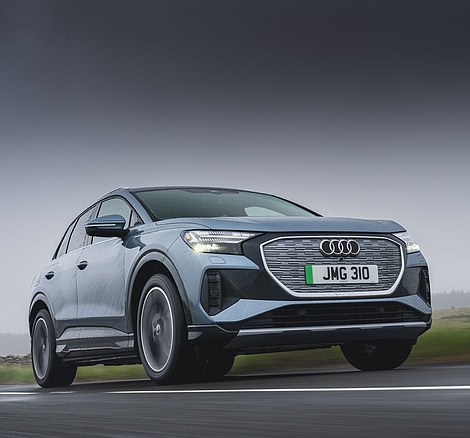 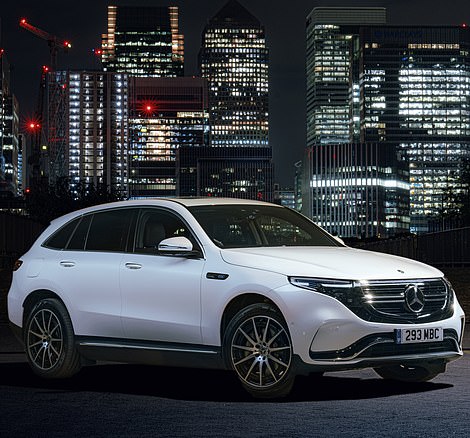 A number of supremely-expensive electric cars are at the bottom of the E-Rating scale. Most of them are heavy SUV models with their added bulk putting a strain on the performance of their batteries. D-rated EVs include the Audi e-tron left) and Mercedes EQC (right)

Looking at the miles per kWh alone, Electrifying.com calculated the cost difference to cover 10,000 miles between an A++ rated car (BMW i4) and a car graded E (Mercedes EQV) to be £675 when charging at home, and more than £1,308 if using public chargers.

Founder and CEO of Electrifying.com Ginny Buckley said: ‘Plugging in at home still costs less than fuelling with petrol or diesel, so it is easy to dismiss the efficiency of electric cars. But it’s crucial that people look at this when considering their next vehicle – in the same way they would when buying a new fridge freezer – as the costs of a less efficient model can soon add up.

‘An electric car that is more frugal will save money, go further and spend less time charging, meaning greater convenience for drivers.

‘This is why we’ve pioneered an efficiency rating; to help consumers to make an informed decision when it comes to making the switch.’

While the Mercedes EQV and BMW i4 are not competing in the same segment, there are still big differences between similar electric models that are attracting the same customers. 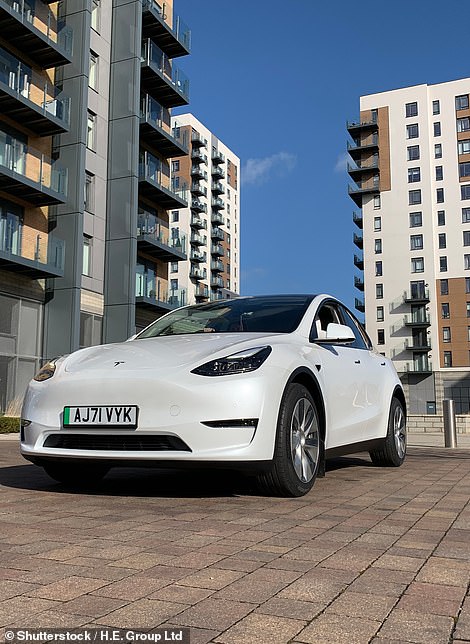 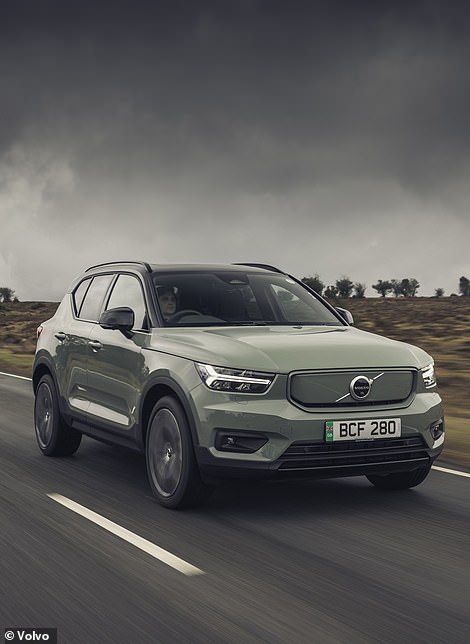 The Tesla Model Y (left) and Volvo XC40 Recharge (right) are both compact SUVs around similar price points, though the latter is up to £440 more expensive to charge a year for motorists without off-street parking

Electrifying.com adds: ‘Besides the extra cost, owners will find themselves waiting for a charge much longer in the least efficient cars – partly because they use more energy to move, but also because they charge at a slower rate.

‘A Vauxhall Mokka-e can take on power at twice the speed of a Mazda MX-30, for example, while the newest Hyundai and Kia models can add 60 miles of range in under five minutes.’

Electric car owners have seen the average price to use public rapid chargepoints in Britain rise by a massive 42 per cent just four months, which makes running an EV almost as expensive as filling up with petrol.

The RAC said the average pay-as-you-go rates to use the nation’s network of chargers with the fastest speeds has increased by 18.75p per kilowatt hour (kWh) since May, reaching 63.29p per kWh last week.

This rise – caused by the soaring wholesale costs of gas and electricity – has made it nearly £10 more expensive to rapid charge a typical family-sized electric car to 80 per cent.

The figures show a driver exclusively using rapid or ultra-rapid public chargers pays around 18p per mile for electricity, up from an average of 13p per litre in May. This compares with roughly 19p per mile for petrol and 21p per mile for diesel. 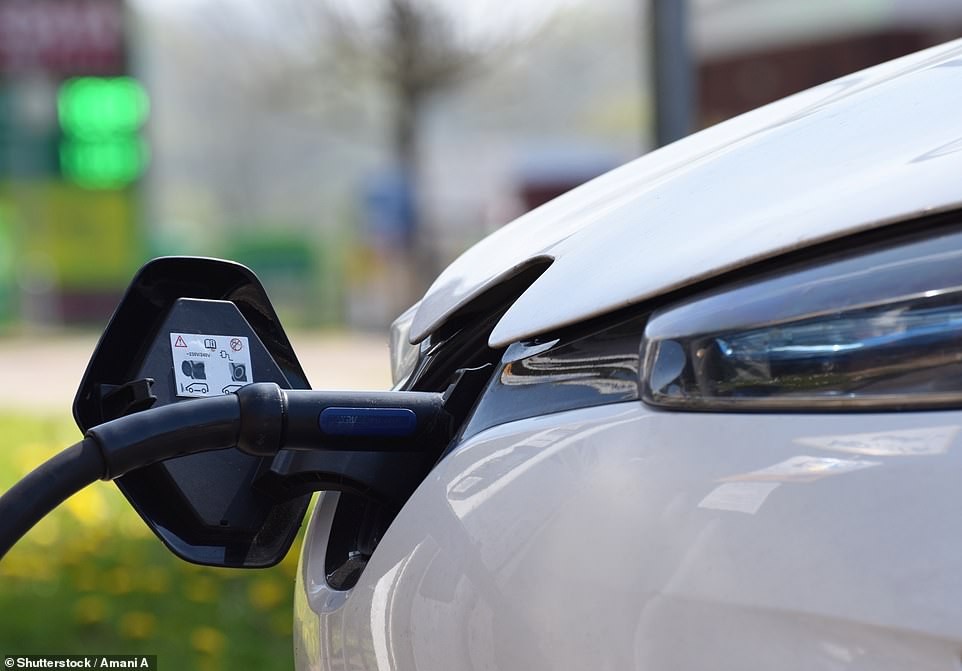 The motoring organisation’s calculation is based on the charging costs for an electric family car with a 64Kw battery, such as the Hyundai Kona Electric or Kia e-Niro.

The RAC says it is becoming increasingly concerned that the relatively high cost of rapid charging on the public network risks putting off drivers from opting for electric cars when they next change their vehicles.

RAC spokesman Simon Williams said: ‘It remains the case that charging away from home costs less than refuelling a petrol or diesel car, but these figures show that the gap is narrowing as a result of the enormous increases in the cost of electricity.

‘These figures very clearly show that it’s drivers who use public rapid and ultra-rapid chargers the most who are being hit the hardest.’

Most electric car owners predominantly charge at home, which was already cheaper than using public infrastructure before wholesale energy prices began to skyrocket on the back of conflict in Ukraine.

However, for a third of homeowners without off-street parking, boosting an electric car’s batteries at their property simply isn’t an option and means they rely predominantly on a public infrastructure of charging devices.

Details of the Government’s Energy Bill Relief Scheme for business should help public chargepoint operators from having to increase rates further, which are already far higher than what drivers pay when plugging in at home.

The figures show a driver exclusively using rapid or ultra-rapid public chargers pays around 18p per mile for electricity, compared with roughly 19p per mile for petrol and 21p per mile for diesel

Most electric car owners predominantly charge at home, which is cheaper than the public chargepoints. But for a third of people who live in flats and properties without off-street parking, they are unable to plug their vehicles in where they live

This is in part compounded by the fact that VAT on domestic charging is at 5 per cent, while taxation on the public network is the full 20 per cent. Bosses from a number of operators and the wider EV industry wrote to the Chancellor ahead of last week’s mini-budget calling for VAT to be slashed, though this wasn’t one of the numerous tax cuts announced by Kwasi Kwarteng on Friday.

A fortnight ago, major operator Osprey Charging said escalating wholesale electricity prices had left it no choice but to up its rates to £1 per kWh – though since the energy bill’s confirmation a week ago has said it will likely revise its pricing downwards.

Still, the higher cost of charging using the public network is likely to impact appetite for EVs. 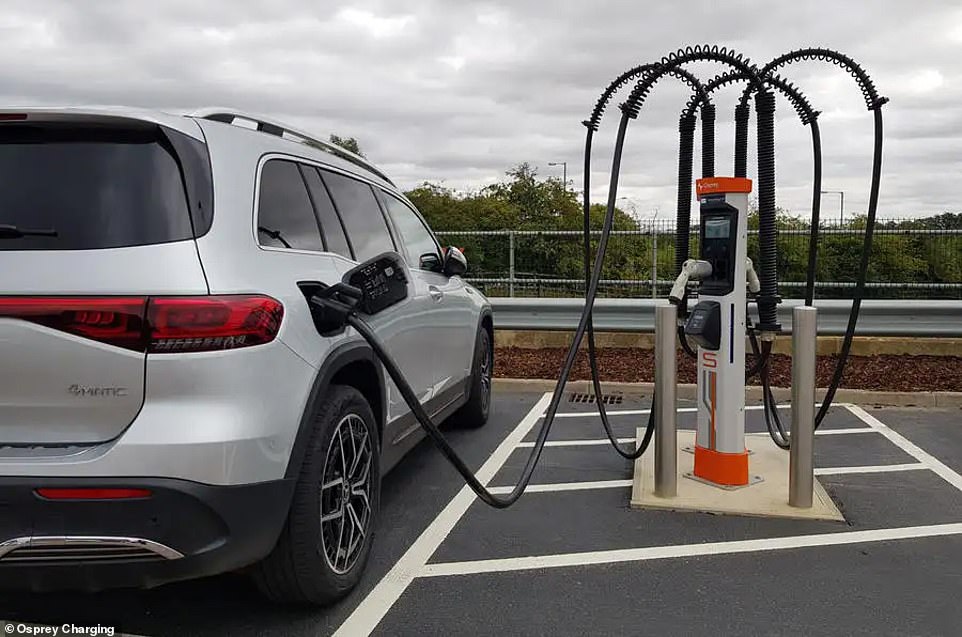 Osprey Charging currently has the highest charging costs of any public network at £1 per kWh. It said it had been left with little option but to hike rates due to rising wholesale electricity costs, though since last week’s Energy Bill Relief Scheme said it will likely reduce prices

An AA survey of 12,500 drivers indicated that rising domestic energy prices are putting many people off from switching to an electric car.

Some 63 per cent of respondents said the increase in home electric bills is contributing to them sticking with petrol or diesel models, while 10 per cent stated it was the ‘main reason’.

‘However, the reality is that even with the hike in domestic electricity costs, running an EV is considerably cheaper than a petrol or diesel car.’

With sales of new petrol and diesel cars and vans in the UK due to be banned from 2030, Mr Cousens said the Government will need to ‘keep a watchful eye on how energy prices will impact the transition to electrification’.

The reality is that even with the hike in domestic electricity costs, running an EV is considerably cheaper than a petrol or diesel car

Last week, a survey of EV owners by Which? revealed that drivers who have made the switch to electrified cars are not only facing higher costs to access public charge points but are still being frustrated by a lack of reliability, with half reporting that they’ve had instances of arriving at devices that are not operating as they should.

Tanya Sinclair from ChargePoint says the headline figures from the RAC study might sound concerning but points out that most EV drivers either charge at home or work where costs are considerably cheaper.

‘DC Fast Charge, which is becoming more expensive due to the energy crisis, is a small part of the equation in EV charging,’ Sinclair says.

‘It only plays an important role when people drive beyond the range of their vehicle and need to be able to charge their EV quickly.

‘Ninety per cent of the time people charge their vehicles from home or work, which is much more cost effective than DC Fast charging.’

Latest figures from the Society of Motor Manufacturers and Traders show the rapid increase in sales of new pure electric cars has slowed in recent months.

The number of registrations during the first three months of the year was 102 per cent more than during the same period in 2021.

At the end of August, the year-to-date increase had fallen to 49 per cent.

What is a Santa Rally? Investing Explained