You need only look at your weekly food shopping receipt to know that prices are rising.

The same inflationary pressures that are pushing up your grocery costs are impacting companies all around the world as well.

Many of the companies that we invest in are facing price squeezes, thanks to ballooning raw material costs, expensive supply chains and rising wages.

This affects their bottom line – and ultimately the value of your investment portfolio. 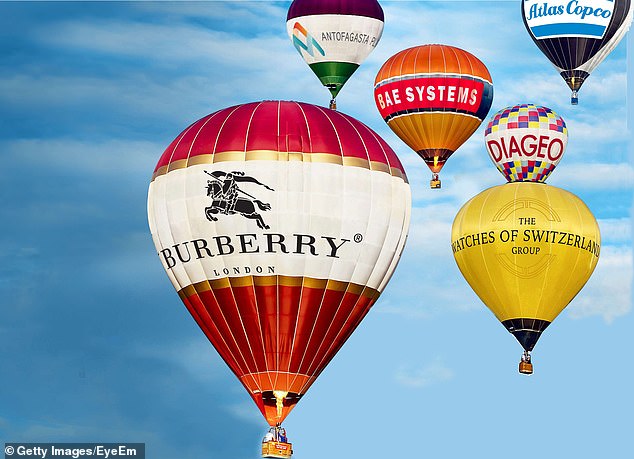 Flying high: Some companies are better able to deal with inflation than others because they are able to pass on rising costs to their customers

But some companies are better able to deal with inflation than others because they are able to pass on rising costs to their customers.

They may offer a product or service that customers will pay for even if prices increase, or have inflation-linked increases built into their contracts.

Here are stocks, and four funds, that investment experts think could thrive despite rising inflation.

Such is the strength of its brands that customers are likely to stay loyal even if prices rise. Diageo owns labels at all different price points, so if customers choose to trade down they are still likely to opt for an alternative Diageo product.

Jason Hollands, managing director at wealth platform Bestinvest, says the sales resilience of Diageo-owned Guinness is a prime example. He says: ‘Commercially, Diageo really doesn’t have a serious rival in the stout market.

‘Diageo has a long track record of being able to raise the price of a pint of Guinness in line with the average wage increases of the typical average worker. I fully expect this to continue.’ 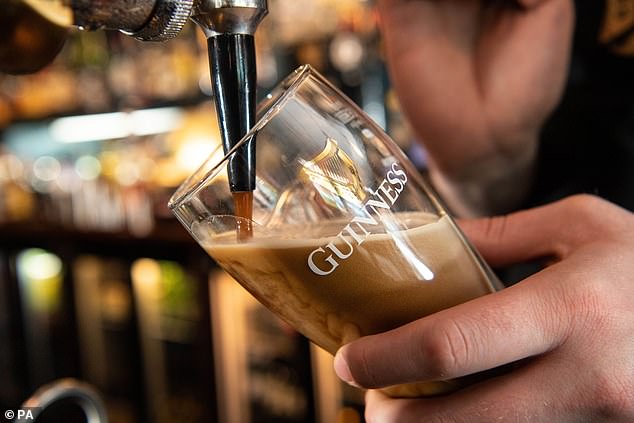 Drinks giant Diageo owns brands such as Guinness, which investment experts say doesn’t have a ‘serious rival’. This means the firm case increase the cost of a pint in line with wages

He says: ‘Part of the reason for this is the high barriers to entry which the industry has. For example, a new entrant in the whisky market would need to go through the distilling and ageing process before even considering making a sale and turning a profit.’

Mining companies are likely to remain resilient as demand grows for the commodities needed in the production of electric vehicles and other low-carbon technologies.

Inflation tends to escalate at times of strong economic growth and increasing investment in infrastructure. Mining companies benefit when this happens.

James Carthew, head of investment companies at fund research group QuotedData, believes copper will be one of the big winners in the drive towards a carbon-neutral world. He says: ‘Copper is essential in electrifying the world, in particular the electric car.’

He recommends Antofagasta, a pure copper miner that has seen its share price hit by political changes in Chile. ‘Its share price has fallen from £19 to £14.25 so now might be a good entry point,’ he says. Its shares are listed on the London Stock Exchange.

Carthew adds that the company is now focusing on its environmental impact, which could increase its appeal to customers and investors alike. He says: ‘Antofagasta will get 100 per cent of its energy from renewable sources by the end of this year while 90 per cent of the water it uses will be from sea water or recirculated by 2025.’

You might expect sales of luxury goods to suffer at a time when rising inflation is putting pressure on our wallets. 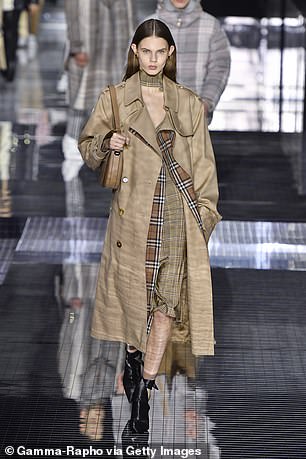 ‘Part of the attraction to its well-heeled clientele is the fact that its products are not affordable to all,’ he says. ‘That sense of exclusivity lures in the wealthy buyers’ minds, along with the craftsmanship behind, and quality of, the products themselves.’

Burberry is a UK-listed firm that operates in this luxury market and has a strong global brand.

Its shares stand at £17.32 and have barely budged in the past 12 months as lockdown has curbed the appetite for designer handbags and clothes. But the shares could get re-rated swiftly as consumers grow tired of loungewear and international tourism takes off once more.

‘Luxury watches have higher demand compared to supply,’ he says. ‘This gives manufacturers, and in turn retailers like Watches of Switzerland, the ability to pass on any cost pressures to customers.’

The company’s shares have been a star performer over the past year, up 121 per cent to £13.50. But Anderson believes that there is more to come.

Job Curtis, manager of investment trust The City of London, is a fan of defence contractor BAE Systems as an inflation-busting pick.

The company manufactures military aircraft, surface ships, submarines and radar systems. He says: ‘While government budget deficits have risen because of the pandemic, the need to spend on defence is clear given rising international tensions.’

He points out that last year the UK Government decided to increase the defence budget over the next four years. Defence companies are protected from inflation by contracts that allow them to pass on most cost increases to customers.

Not all investors will feel comfortable investing in a company that manufacturers weapons. Yet Curtis believes its current share price of £5.78 represents good value, while a 4.5 per cent annual dividend may attract income seekers.

Swedish industrial giant Atlas Copco sells an array of tools and machinery that are critical to businesses in industries such as aerospace, car manufacturing, infrastructure and oil and gas.

Atlas Copco also services the products it sells, which provides it with a good income stream from customers. ‘More than 60 per cent of Atlas Copco’s operating profits come from this aftermarket service franchise,’ says Martin Connaghan, manager of investment trust Murray International. ‘This is around double the sector average.’

The shares are listed in Sweden, but you can buy them through mainstream UK brokers. At 588 Swedish krona (£48), they are up 31 per cent in the past year.

…or consider these five trusts

Russ Mould likes industrial real estate investment trusts (REITs) as some earn an income from rental contracts that rise in line with inflation.

‘These look attractive when prices rise, as long as their tenants don’t go bust,’ he says.

One favourite is Industrials REIT, formerly known as Stenprop. It focuses on warehouses located on the edge of towns, which are in strong demand thanks to the rise in online shopping.

The shares are up more than 40 per cent in the past year at £1.99, reflecting the increased interest in this area.

Publicly owned infrastructure is another sector in which price rises can be passed on to customers. To invest in this theme, Jason Hollands suggests stock market-listed fund HICL Infrastructure, which holds 100 assets including hospitals, tunnels, roads and schools.

For those who want an ethical pick, James Carthew suggests JLEN Environmental Assets.

This investment company has a portfolio of environmental infrastructure projects, from anaerobic waste digestion to hydro and wind power.

The revenues of nearly three quarters of the projects it invests in are linked to inflation.

At £1.02, its shares are down 10 per cent in 12 months, but it’s well placed to capitalise on long-term climate trends.