Tony Hetherington is Financial Mail on Sunday’s ace investigator, fighting readers corners, revealing the truth that lies behind closed doors and winning victories for those who have been left out-of-pocket. Find out how to contact him below.

K.M. writes: I received a promotional email from the respected London financial newspaper CityA.M., for a sophisticated investment from Orange River Wealth.

The advert makes some extraordinary claims: 15 per cent in annual dividends and 300 per cent capital returns.

I telephoned CityA.M. with my concerns, and was told by its sales department that ‘pretty much all adverts are full of lies’. 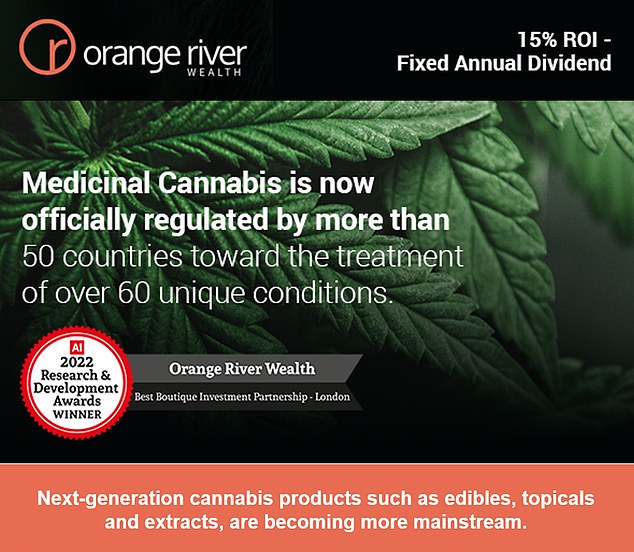 Claims: London financial newspaper CityA.M. sent out emails with details of the offer, above

Tony Hetherington replies: It is impossible for any newspaper to carry out detailed vetting of every advertisement. There would be no way local papers could test drive every second-hand car that was up for sale, or conduct a structural survey of every house that was advertised.

That said, I know from experience that The Mail on Sunday’s advertising staff do try to avoid dubious financial advertisements, because they have asked me to look into them, and on occasion we have simply refused to publish them.

And since City A.M. is a specialist financial publication, I think it is reasonable to expect staff there at least to cast an eye over anything they email to thousands of subscribers, even if they do nothing more than spot the hugely obvious red flags that flutter over Orange River Wealth’s offering.

The first red flag is that although the advertisement is headed ‘Orange River Wealth’, the offering is actually for preference shares in a separate but connected company called Orange River Capital, which is raising money to take a stake in a medicinal cannabis business in South Africa.

After this, the red flags come thick and fast. The offer document is dated March, but CityA.M. advertised it just a few weeks ago. It lists Alexander David Securities as its Financial Conduct Authority-regulated broker. Yet on April 29, the regulator imposed serious restrictions on this firm, and on July 1 – a month and a half before the CityA.M. promotion – Alexander David Securities went into liquidation.

Investors are entitled to know who they are dealing with, and the Orange River offer lists Sarah Stubbs as a director, and gives details of her business experience. Yet Sarah Stubbs quit as a director on June 14.

The company’s chief executive is Lee Farbrace, who says he is currently a director of five companies he lists. Wrong. He has forgotten one. This is EMI Wealth Limited, where he is the sole director. The company was involved in a long-running legal tussle in which an investor gave evidence that he met Farbrace in 2010 and parted with £130,000.

The company claimed to have made ‘significant profits’ from a scheme it was marketing along with a separate but connected company called Emerging Markets Investment Limited. The scheme was said to offer ‘unparalleled low risk returns’, but just a year later, the investor was told the scheme had run into trouble. He lost £100,000. Perhaps this is why Farbrace would sooner forget about it.

The questions hanging over the two Orange River companies go on and on. The advert claims a full dividend was paid by Orange River Capital in January, but as this company is actually owned by Orange River Wealth, was this just a bookkeeping exercise?

It would be nice to know the answer, but both companies have failed to file accounts that were legally due early in August. In fact, the offer document says that Orange River Capital has not traded yet, so how did it manage to pay last January’s dividend, which the City A.M. advertisement boasts is evidence of a ‘proven track record’?

The company cannot even get its own address right. The statutory information in the offer document says its registered office is at ‘

I put all of the above to CityA.M. Its sales director Jeremy Slattery denied that CityA.M. ‘promoted’ the share offer. He told me: ‘It published a paid-for advertisement, as it publishes many, many others on a daily basis. CityA.M. does not carry out due diligence on any of its advertisers. I doubt any newspaper does.’

And I put the same points to Orange River boss Lee Farbrace. He replied immediately, telling me: ‘I shall of course respond in full tomorrow.’ That was almost a fortnight ago, on September 6. As Cliff Richard once sang, tomorrow sometimes never comes.

Ms C.T. writes: I registered for VAT and on July 28, HM Revenue & Customs gave me a VAT number, telling me I would have online access to the VAT account within three working days.

However, I still have no online access, and they say this is due to ‘technical issues’ within Revenue & Customs.

Tony Hetherington replies: Without access to Revenue & Customs’s online service, you could not even print off your VAT registration certificate.

Worse still, being shut out of the system means that your new business cannot file VAT returns – and you reckon that you will be entitled to a refund of around £10,000, which you have no way of claiming.

I asked officials to look into this. They quickly told me: ‘We apologise for the issue experienced by the customer accessing their VAT online account. HMRC is aware of an issue which has affected a low number of businesses, and following investigations a fix is due to be implemented very shortly.’

You have now told me that the online system is working, so you can claim your refund without any problem.

If you believe you are the victim of financial wrongdoing, write to Tony Hetherington at Financial Mail, 2 Derry Street, London W8 5TS or email [email protected] Because of the high volume of enquiries, personal replies cannot be given. Please send only copies of original documents, which we regret cannot be returned.