Tortilla Mexican Grill has admitted that earnings have been negatively impacted by higher protein costs triggered by Russia’s full-scale invasion of Ukraine.

The fast-food chain revealed profits dived by about 93 per cent to just £156,500 in the 26 weeks to early July, from £2.29million in the previous year, even as trading remained relatively strong.

Revenues climbed by 30 per cent to £26.9million thanks to the absence of Covid-related restrictions on non-essential outlets, the addition of new sites and significant underlying sales growth. 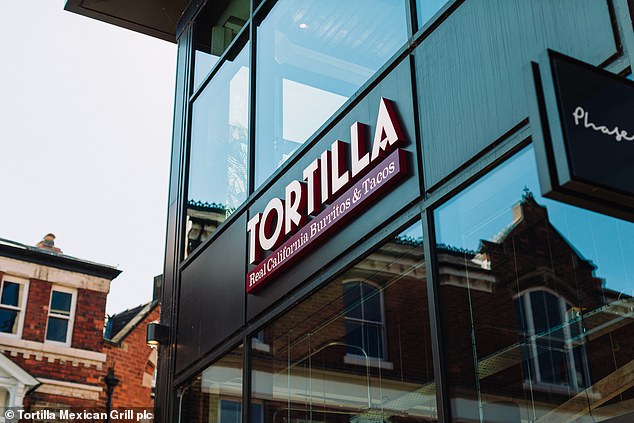 Earnings: Tortilla Mexican Grill revealed profits dived by about 93 per cent to just £156,500 in the 26 weeks to early July, from £2.29million in the previous year

But the London-based firm revealed its gross margins fell, primarily due to the temporarily discounted VAT rate on supplies to hospitality venues ending in March.

It also blamed the growing share of in-store orders, whose prices are around 20 to 35 per cent lower than customer deliveries, and rising protein costs resulting from the Ukraine war.

Tortilla warned that its protein costs, which represent approximately one-third of all its expenses, would surge by about 40 per cent this year, while utility bills are set to increase by £500,000.

Though it said measures had been taken to minimise cost rises, the group expects inflationary pressures to cause a £1.8million impact on full-year gross margins.

Following this announcement, Tortilla Mexican Grill shares tumbled by more than a quarter to £1.04 in morning trading, meaning their value has fallen by 43 per cent since listing 12 months ago.

The Mexican food seller has used some of the proceeds from its initial public offering listing to expand its estate, growing from 62 sites in September 2021 to 84 across the UK, Republic of Ireland and the Middle East.

Many new outlets belong to former rival Chilango, which the business acquired for £2.75million in May, while others are franchises operated by catering giant Compass Group and Upper Crust owner SSP Group.

Tortilla said it expects to open 12 to 15 more venues from next year in order to take advantage of the ‘depressed’ commercial property sector and its strong trading outside London.

But the AIM-listed firm also noted trading was impressive within the capital, with sales in ‘Zone 1’ destinations barely below pre-pandemic levels.

Richard Morris added: ‘Against a backdrop of challenging macroeconomic conditions, I am really proud to report that we have continued to make great progress against our ambitious growth plans laid out at our IPO last year.

Online safety bill will take 18 months to have full effect