Investment trust Utilico Emerging Markets is a different beast to most of its peers.

Unlike conventional emerging markets trusts, it concentrates on the companies that provide the building blocks for developing economies to grow – for example, utility providers, operators of airports and ports, and businesses involved in establishing a digital infrastructure.

Although this focused approach precludes it from investing in many of the companies that other emerging market funds like – retailers for example – it seems to work. 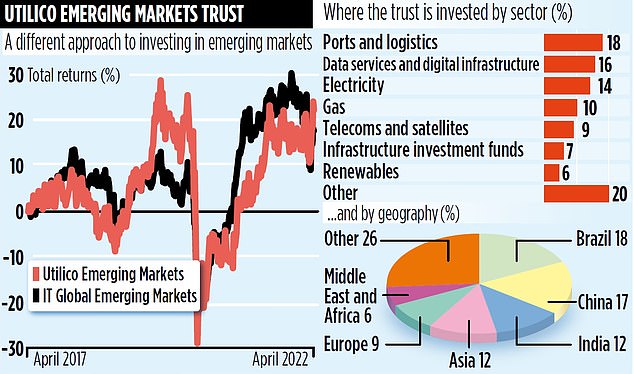 Over the past one, three and five years, the £479million stock market listed trust has outperformed the average return for emerging market trusts. For example, it has generated overall profits for investors of 15 per cent in the past 12 months, compared to an average of 0.2 per cent for the sector.

Reassuringly, a slice of this return has been in dividends, paid quarterly. Impressively, these payments, currently running at two pence every three months, kept rising through the pandemic – and it is highly likely that the dividends paid for the financial year just ended will be a notch up on the previous year.

The trust’s shares stand at £2.26, meaning shareholders are receiving an annual income equivalent to around 3.5 per cent a year.

The trust is run by global fund manager ICM and its lead manager is Charles Jillings. It has 80 investments scattered across the world, but concentrated in Latin America and Asia. Two thirds of them provide the trust with dividend income.

‘A lot of the investments we hold are businesses that rivals would put in the ‘too complicated box’,’ says Jillings. ‘But we’ve been investing in these types of assets for years and we understand them intimately. The trust is nearly 17 years old.’

Some 90 per cent of the trust’s holdings are listed on a stock market. Also, 90 per cent are ‘operational’ – delivering profits and revenues rather than being in construction mode. ‘In identifying likely investments,’ says Jillings, ‘we like to see evidence that the managers of the business are performing.’

For example, G r u p o Aeroportuario del Pacífico, known as GAP, is a Mexican airport operator headquartered in Guadalajara, Mexico. The trust has 1.8 per cent of its assets in the company’s shares – a top 20 holding. ‘GAP operates 14 airports in Mexico,’ Jillings says. ‘We understand the business and we like what the management team are doing.’ 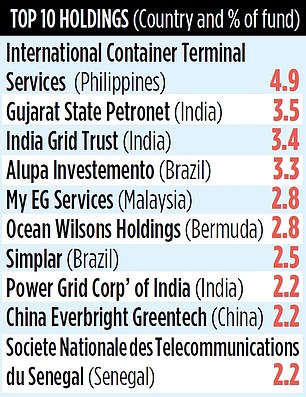 Like most fund managers, Jillings is nervous about the future, especially the war in Ukraine and geopolitical tensions.

The trust has widened the portfolio to ensure it is more diversified. It has also recently made key investments in digital infrastructure companies such as Chinese data operator Chindata, whose shares are listed in the US.

‘The market is fretting about Chinese companies listed in the US,’ he adds, ‘but I prefer to pay attention to the underlying business. Its revenues are growing at 55 per cent year on year.’

The trust’s total annual charges are on the high side at 1.4 per cent, but will fall if the assets grow. The stock market identification code is BD45S96 and the ticker is UEM. It should only form a small portion of any overall investment portfolio.

Travis Barker’s ‘life-threatening’ pancreatitis from recent endoscopy: What is it?

TONY HETHERINGTON: Why pay to be in UK Business Profiles directory?

Insurers forced to prove they have stopped ripping off loyal customers