Because the original VW Polo Harlequin was made up of a group of cars with shared panels, it was difficult to tell what colour each car started life out as when you see one on the road.

Body parts of blue, yellow, green and red cars – including bonnets, tailgates, doors, bumpers and mirrors – the way of knowing which colour a car was originally is the roof panel.

If you can take a closer look, you can also tell the original colour from the door sills and the engine compartment. 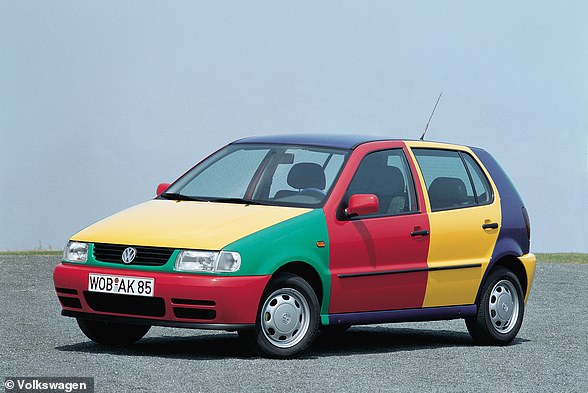 If you see an original Polo Harlequin on the road, you can tell the original colour of the car by the roof panel

2, Same pattern repeated, but buyers didn’t get to choose

To give an idea of ​​the colour pattern: on each Harlekin, the front bumper, the front doors and the mirrors are the same colour as well as the rear doors and rear bumper.

As a customer you could order a Polo Harlequin, but you could not indicate a preference for the base colour and combination. You just had to wait and see which of the four available colour combinations you finally got.

The Polo Harlequin was not officially available in the Netherlands, though many ended up in the country. One owner told VW they were stopped by police, not because of a violation but because they wanted to know the colour the car was officially registered. 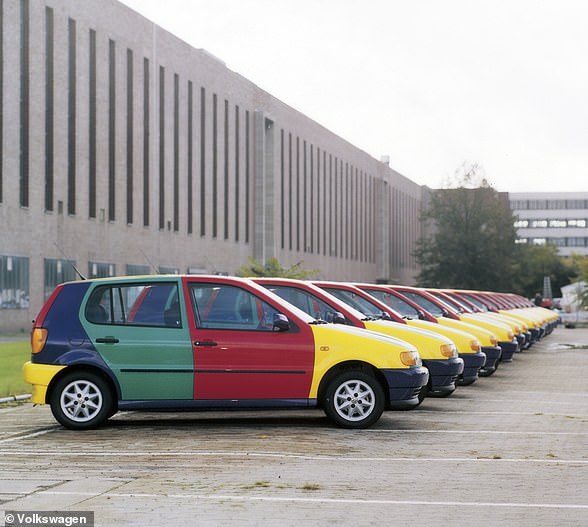 In the mid 1990s, McDonalds gave away 500 examples of the Polo Harlequin in Germany as part of a customer lottery

n Germany, the Polo Harlequin is still to this day associated with fast food chain, McDonalds.

That’s because they offered them as part of competition for customers.

When ordering from the menu, diners would receive part of a photo of the car. Six different photos together would create the full vehicle and with a picture of a complete car you could then participate in a lottery to win the real thing.

Incredibly, 500 were given away.

5. It wasn’t the only multi-coloured VW

The idea of ​​body panels in different colours was not entirely new to Volkswagen in the early ’90s.

An advertisement from 1964 showed a brightly coloured Beetle. That advertisement was intended to demonstrate how easily parts of Beetle models from different construction years were interchangeable.

And since the Polo, the Harlequin idea was used in the US.

In 1996 the Golf was available on North America as a Harlequin that matched the Polo variant’s colour schemes. Just 246 were produced.