Watches of Switzerland has reiterated its full-year forecasts as it maintained healthy sales despite a more challenging economic backdrop.

The London-listed boutique retailer saw total revenues increase by 31 per cent to £397million in the three months to the end of July, with demand for luxury watches surging by around a third to £342million.

Sales in the UK and Europe grew by 8 per cent to £239million after an impressive comparative period last year when its stores benefited from destocking and a release of pent-up demand when Covid restrictions were loosened. 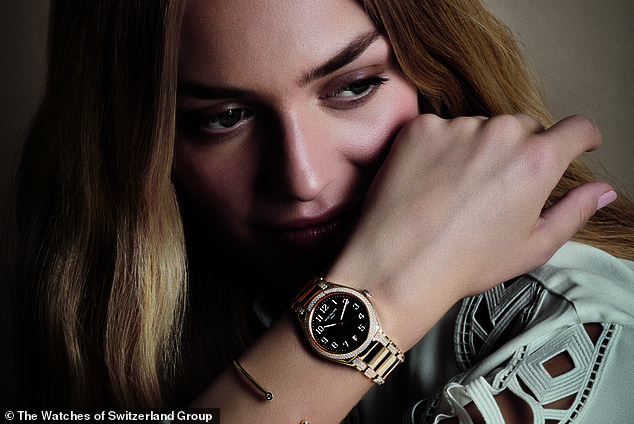 Growth: Watches of Switzerland Group revealed total revenues increased by 31 per cent to £397million in the three months to the end of July

In comparison, revenues in the US, where the group operates the Mayors and Betteridge jewellery chains, doubled to £152million thanks to robust performances at newly opened showrooms.

Though the company expects tougher trading conditions in the second half of the financial year, it upheld its annual guidance due to the solid demand.

It predicts full-year revenues will hit £1.45billion to £1.5billion, while adjusted underlying earnings are anticipated to rise by at least a fifth to around £157million to £169million.

Chief executive Brian Duffy said: ‘The first quarter continued with strong momentum throughout, and we carry this positive momentum into the second quarter.

‘Despite the well-publicised concerns about the macro-environment, demand for our products remains robust with client registration of interest lists continuing to extend.’

Duffy added that the business would be moving its flagship Rolex Boutique store on Bond Street to a new, larger 7,200 square-foot location on the southern end of the famous shopping destination sometime next year.

Watches of Switzerland, which sells brands ranging from Breitling to Tag Heuer and Omega, has 173 outlets across the UK, including on Oxford Street, the Royal Exchange and six in Heathrow Airport.

Outside of the capital, the group recently opened a mono-brand boutique with Tudor in the Bristol Cribbs Causeway shopping centre, followed soon after by one with Breitling in Sheffield’s Meadowhall complex.

The business is also expanding into Europe, with a new showroom launched in Stockholm, Sweden and another five expected to follow by the beginning of May 2023.

But AJ Bell investment director Russ Mould warned that while the business has provided a very optimistic outlook in its trading update, it could be badly impacted by the current declining price of luxury watches in the secondary market.

He added: ‘One of the key attractions for premium watches is that they are seen to be a good investment as editions are limited and there are plenty of people who want to own them.

Watches of Switzerland Group shares were up 2.9 per cent to £9.10 during the late afternoon on Tuesday, although their value had declined by nearly 40 per cent so far this year.