INVESTING EXPLAINED: All you need to know about yield curve inversion – as yields on longer-term bonds fall closer to those on bonds of shorter maturities

In this series, we bust the jargon and explain a popular investing term or theme. Here it’s yield curve inversion.

Bit of a mouthful

Indeed. It’s a bit complex, but bear with me, as this is a widely followed and important indicator, based on the yields of Government bonds. First, some basics. The yield on an investment is the return to an investor from interest payments. Bonds, which are IOUs that can be bought and sold, often pay a fixed interest rate or ‘coupon’.

This means the yield depends on the price of the bond. If you buy a bond with a face value of 100p and a coupon of 10 per cent for 90p, then the yield is around 11 per cent.

But if you purchase the bond for 110p, then the yield is just over 9 per cent. Prices and yields are inversely related: if a bond’s price falls, its yield rises. 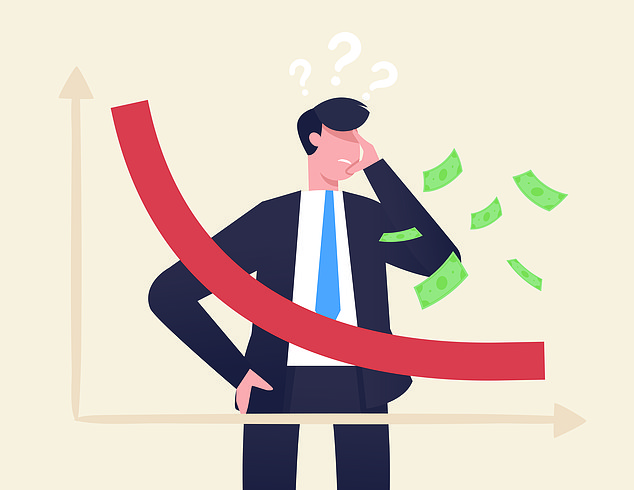 Curve ball: For the past half-century in the US, yield curve inversion has been a reliable signal of looming economic gloom or even recession

Where does the curve come in?

The yield curve is just the line on a chart plotting the yield on bonds against the time they have to run to maturity.

Yields on shorter-term bonds are usually lower than those on longer-term bonds. This is because investors expect a higher return for locking their money away for a decade or more, during which time its value will be eroded by inflation.

In normal circumstances, if the yields on three month, two-year and 10-year bonds are plotted on a chart, the curve should slope upwards. But if pessimism gathers about the near-term direction of the economy, the yields on longer-term bonds may fall closer to those on bonds of shorter maturities. This is known as an inversion in the curve.

What does it indicate?

For the past half-century in the US, yield curve inversion has been a reliable signal of looming economic gloom or even recession. This is why this indicator is a huge preoccupation on Wall Street – and has become even more so this summer. The yields on two-year and 10-year Treasury ‘bills’ or bonds are the most closely scrutinised, which is why New York traders so often talk about ‘the 10-2’.

So what’s happening in the US?

They say the only consequence of this inversion will be that the US Federal Reserve will be compelled to raise interest rates faster than it planned. For observers, this is confusing since the US is technically in a recession. The economy has mildly contracted for two successive quarters.

But the banks are healthy, people are spending and 528,000 jobs were created in July, suggesting that recession is not necessarily a foregone conclusion.

Should investors be concerned?

America is the world’s biggest economy. What happens there matters and will be closely monitored in the UK. You could even say that the $23trillion (£19trillion) US bond market serves as a barometer of global economic health. This week, for example, the news that US inflation dipped in July was sufficient to ensure that the FTSE 100 rose.

Some analysts focus on instances of yield curve inversion in the Government bonds or ‘gilt’ markets, attempting to discern the length and depth of a recession. But this indicator does not have what one commentator called ‘the mythical hold’ on UK policy.