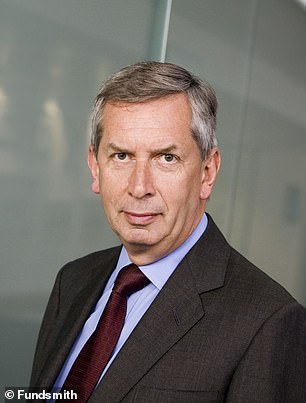 Star turn: Terry Smith has won fans among investors for his no-nonsense approach and bumper returns since launching Fundsmith

‘Contrary to the mantra that every fund has to recite, past returns of companies are a good guide to future returns.’

As well as taking a potshot at Unilever’s mayonnaise with purpose and ESG mania, Terry Smith fired a broadside at the watchdog’s required risk warning in the latest letter to his Fundsmith shareholders.

The Fundsmith manager has won legions of fans among investors, thanks to his no-nonsense approach and more importantly a 570 per cent return since his fund’s 2010 launch vs the global stock market’s 287 per cent.

Smith was writing specifically about the merits of backing quality companies over cheap low quality firms, as he outlined his investment strategy.

In a style akin to the shareholder letters of Warren Buffett – an investor he admires greatly – Smith’s annual missive is a mix of stock specifics, strategy and thoughts on the current financial world.

Regardless of whether they invest in his fund or not, the Fundsmith annual letter is worth a read for investors.

One of the main themes this year is the supposed rotation to value – the idea that expensive growth shares have had their day in the sun and it’s now time for cheap beaten down companies to shine.

In his letter, Smith talks of a rotation from quality to value, whereas in general the chatter is often of a switch from growth to value.

Quality and growth investing share attributes but are different: the former involves profit machine companies with a robust track record of earnings and growth, whereas the latter is more typically characterised as involving disruptive companies – often with a tech influence – seen to have explosive growth potential.

Fundsmith is the poster child for quality investing among UK funds, while at the more considered end of moonshot growth strategies lies something like Scottish Mortgage investment trust.

There’s not a great deal of crossover between Scottish Mortgage and Fundsmith, nevertheless the same question has been asked about these two highly successful and popular funds that have richly rewarded their investors.

This is whether the sparkling returns over the past decade or so can continue?

Delving deeper, critics ask where the balance lies between stock-picking skill and the tailwind of investing heavily in the US stock market and its soaraway profit machine and growth shares.

The implication is that a reversal of fortune is coming and after more than a decade in the doldrums it is value investing’s time to shine.

This is a perfectly reasonable thing to ask. After all, the conditions that have seen certain parts of the market outperform in the past are not necessarily going to be the same in the future.

The pandemic has shaken up the pieces of the global economy and they won’t all land back in the same place.

Meanwhile, monetary policy has gone further through the looking glass and the results of that remain to be seen.

Yet, Smith puts together an argument against trying to play this trade, stating: ‘In our view it would be a mistake to sell some of these good businesses in order to invest temporarily in companies which are much worse but which have greater recovery potential.’

After outlining his investment philosophy and strategy, he elaborates further on this.

Smith writes: ‘In our view, the biggest problem with any investment in low quality businesses is that on the whole the return characteristics of businesses persist.

‘These return characteristics persist because good businesses find ways to fend off the competition – what Warren Buffett calls ‘The Moat’ – strong brands; control of distribution; high spend on product development, innovation, marketing and promotion; patents and installed bases of equipment and/or software which are troublesome to change for example.

‘Poor returns also persist because companies which have many competitors, no control over pricing and/or input costs, and an ability for consumers to prolong the life of the product in a downturn (like cars) cannot suddenly throw off these poor characteristics just because they are lowly rated and/or benefit from an economic recovery.’

Smith adds this chart and states it shows: ‘The excess returns — the amount by which it beats the index — of the MSCI World Quality Index (which I am taking as a surrogate for our strategy’

Despite these assertions it is, of course, possible to make some big short term returns on cheap beaten up shares that are rebounding – the performance of many well-known FTSE-listed companies since the vaccine rally kicked in around November 2020 shows that.

Yet, the difficulty with such a strategy Smith argues is that it not only requires luck but also keeping a vigilant eye on your investments and bailing out at the right time.

He says: ‘Even if you manage to identify a truly cheap value or reopening stock and time the rotation into that stock correctly so as to make a profit, this will not transform it into a good long term investment.

‘You need to sell it at a good moment — presumably when some of your fellow punters / investors will also be doing so because its cheapness will not transform it into a good business and in the long run it is the quality of the business that you invest in which determines your returns.’

Of course, Smith’s way is not the only way to invest.

There is plenty of evidence that buying cheap shares pays off in the long run and there are other fund managers with long track records of profitably pursuing that strategy.

Speak to Fidelity’s Alex Wright, for example, who runs its Special Values trust and Special Situations fund and he will make the case for the style of contrarian value investing that looks for out-of-favour businesses.

My view is that it is better to read Smith’s argument as making the case that if you do go hunting for value, it’s best to try to buy good companies that are cheap rather than any old rubbish with a low price-to-earnings ratio in the hope it rebounds.

That might mean paying a bit more for your ‘cheap shares’ but it dramatically reduces the risk they backfire on you.

Among the other topics that Terry Smith tackled in his shareholder letter was inflation. Here is what he had to say on its causes and impact.

‘It is not difficult to see potential causes of inflation. The expansion of central bank balance sheets with Quantitative Easing after the Credit Crisis has been followed by huge monetary and fiscal stimuli put in place to counter the economic effects of the pandemic.

‘One might reason that given the growth in the money supply has vastly outstripped the increases in production of goods and services the price of those goods and services was sure to be bid up and ipso facto inflation must follow. However, this omits another important element of the equation — the velocity of circulation of money.

‘Are people more inclined to save the additional money or to spend it?

‘The savings ratio leapt after the Credit Crisis and again during the pandemic partly no doubt due to caution but also because there were fewer opportunities to spend, for example on travel and vacations.

‘However, it is now on its way back to pre-crisis levels so maybe we have all the ingredients for inflation to take hold. You might well be confused at this point (I know I am) particularly considering that the ‘authorities’ spent most of the decade post the Credit Crisis trying to generate inflation in order to negate the deflationary effects of the Credit Crisis and its causes.

‘The trouble is that with inflation, as with so much else, you need to be careful what you wish for. It is a bit like trying to light a bonfire or a traditional BBQ on a damp day. If you put an accelerant like gasoline on it you can go from no fire to a loud ‘Whoosh!’ and find that you have also set fire to the garden fence.

‘When inflation takes hold, it too may exceed your expectations. In terms of how to react, if at all, there are also other factors to consider. Inflation in the cost of commodities does not necessarily equate to retail price inflation or asset inflation.

‘So the initial impact of input cost inflation is not on consumer prices but on company profits. All companies are not equal in this regard. The higher a company’s gross margin — the difference between its sales revenues and cost of goods sold — the better its profitability is protected from inflation.’

You can still afford a holiday however tight the financial squeeze

You can still afford a holiday however tight the financial squeeze