Young drivers could save an average of £368 on car insurance by adding an experienced named motorist to their policy – but experts have warned of a rise in ‘fronting fraud’ that could be leave young drivers under-insured.

Drivers under 25 pay an average of £1,489 a year on car cover, with the average cost dropping to £1,121 for those who have a named parent on their policy.

But reports for ‘fronting’ car insurance policies has risen more than 170 per cent in 2021, with nine in 10 drivers reportedly unaware of this type of fraud, says LV insurance. 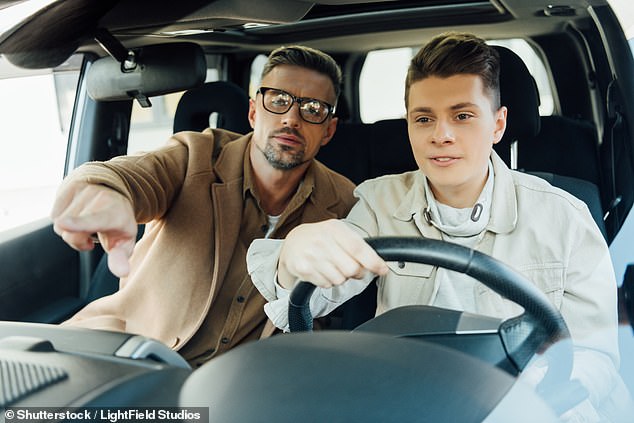 Adding your parent as a named driver on your insurance could cut your policy cost by £300 or more, but be careful not to list them as the main driver, as you could be committing fraud

The initial findings by Compare the Market show two-thirds of parents had been named as additional drivers on their children’s policies to help lower the cost of their insurance.

Meanwhile, 83 per cent of parents think the cost of driving is too expensive for most young people to afford.

Nearly half of parents feel that car insurance is the biggest financial challenge for young drivers, compared to 28 per cent believing fuel is and 8 per cent assuming repairs and maintenance are.

Car insurance has increased by an average of £142 for young drivers, from £1,103 last year to £1,245, due to the rising value of second-hand cars and higher levels of traffic following the pandemic.

And while young drivers can add additional named drivers to their policy to reduce the cost of insurance, experts are urging drivers to be careful to avoid fronting their insurance.

Fronting is a type of insurance fraud, where a driver names someone more experienced than them as the main driver on their vehicle, even though they are the one who’s doing most of the driving.

This type of insurance fraud is typically seen among younger drivers listing their parent as the main driver, or for those facing higher premiums.

With a third of drivers admitting they don’t keep up to date and stay aware of insurance fraud, parents and young drivers could face voiding their car insurance.

If the car is involved in an accident, they could also be liable for the damages and injuries caused in the accident and in some cases, severe consequences can include a substantial fine, points on their licence and even a criminal record.

LV Insurance also found that there was a spike in insurance fraud in 2021.

Pre-inception loss fraud, where an uninsured driver takes out insurance after an accident, in order to make their claim ‘legitimate’, was up 156 per cent, while exaggerated claims rose by 138 per cent with fabricated claims fraud up 81 per cent. 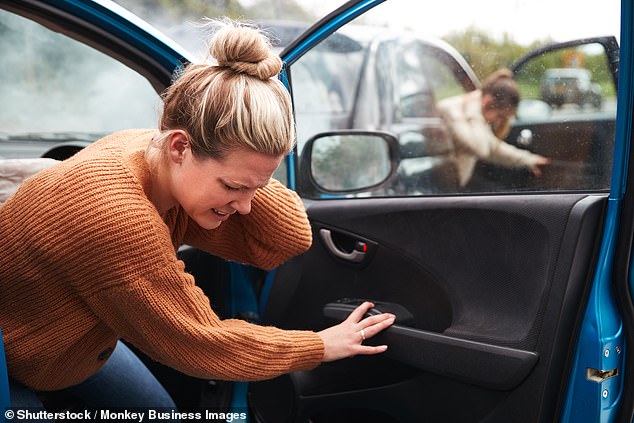 Car insurance fraud has spiked substantially in the last year, with exaggerated claims for damage or injury following an accident up 130 per cent since the cost of living increases

And for those with additional named drivers on their policy, it’s important to note that all named drivers do need to drive the car for the policy to be valid.

The insurance firm urged customers who are struggling financially to contact them to talk about what support they can offer.

Matt Crabtree, head of fraud strategy at LV= General Insurance, said: ‘We’ve sadly seen an increase in motivation for certain individuals to stage an accident or exaggerate an insurance claim.

‘With the easing of COVID-19 restrictions we’ve also started to see staged and induced accidents back to pre-pandemic levels, with increased activity from organised crime groups.

‘I urge the public to remain vigilant to this, and look for dash cam or CCTV footage if you’re involved in what you think is an orchestrated accident.

‘I would also caution anyone who thinks it might be a good idea to get some extra cash by committing insurance fraud, as there can be serious consequences and you may struggle to get insurance in the future.’

Julie Daniels, motor insurance expert at Compare the Market, adds: ‘The cost-of-living crisis and soaring fuel costs mean that many people are struggling to stay on the road.

‘Adding an experienced named driver to your policy is a legitimate way to bring the cost down as long as they also drive the car.

‘However, it is essential that all information provided to your insurer is accurate.

‘Young drivers should take care to avoid fronting as they could land their parents with a criminal record, unlimited fine, and six penalty points.

‘To help save money on car insurance, it is also a good idea for young drivers to shop around and compare policies to see if they can find a better deal. A typical young driver could save over £200 by switching.’